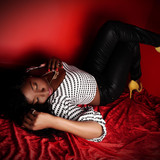 Caleya Black is an R&B/soul singer/songwriter from New Jersey, whose style is inspired by her gospel roots and love of the Motown-era of music.

Her first release, "Our Song", quickly became a favorite for those who appreciated a more nostalgic R&B. "One listen to Caleya Black's single, Our Song, will take you back to time when music that ruled airwaves was so soulful, it became a genre," declared Urban Magazine (Oct. 2016). Caleya later released her debut EP, “Still Loves”, in August 2017. For this release,