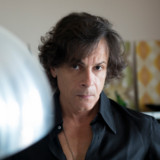 Most of the musicians hate to have to label their music. Nevertheless, Nicola Conte makes the attempt: “You could call it spiritual or cosmic Afro-jazz. I could also agree with calling it Afro-soul.” The Italian guitarist and bandleader Nicola Conte has recorded his first album for the legendary, recently re-established MPS records. Jazz Meets the World – in the best MPS tradition, with the help of a higher force and famous musicians, Nicola Conte combines the sounds of different continents into a unique style. Conte has brought with him an ensemble of stars including Gianluca Petrella (trombone), trumpeter Theo Croker, saxophonists Logan Richardson and Magnus Lindgren, and singers Zara McFarlane, Bridgette Amofah and Carolina Bubbico. Recorded in Bari, Italy and Johannesburg, South Africa, LET YOUR LIGHT SHINE ON is a cohesive and powerful work of art that crosses the border between soul and spiritual Afro-jazz. “I’m interested in the Afrocentric approach that such artists as John Coltrane, and such labels as Strata-East carried forward in the sixties and seventies,” this obsessed record collector enthused. “People dealt with the problems of that time. This may well have greater relevance today than ever before – many problems have only gotten worse.” Visit www.facebook/nicolaconte.official for the new BIO extended version.