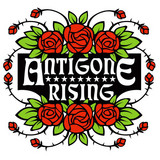 The all-female rock band Antigone Rising blend the '70s sound of Fleetwood Mac and the Eagles with their love of pop so well that it kept them on the road to the tune of 200 or so shows per year, all without a record label. Grassroots promotion and live show after live show earned the band a loyal following and over 200,000 CDs sold. Lava Records president Jason Flom caught wind and signed them in 2004. By 2005 they released their debut for the Lava imprint and Hear Music. The album, From the Ground Up was launched via a Starbucks-sponsored campaign and sold over half a million copies. Back again to their indie roots, the albums 23 Red and Whiskey & Wine Volumes 1 & 2 are the band's latest celebrated releases with many songs co-written with grammy award winning song writer, Lori McKenna. Antigone Rising now tours all over the world playing music and doing outreach work through their self started nonprofit, Girls Rising. A beach festival, aptly titled BeachFest, is their yearly celebration, where the band hosts national and local female artists across two stages. Their Game Changer Awards held on the same weekend is Girls Risings' primary fundraising event, where they honored Carnie Wilson from Wilson Phillips in 2018. Melissa Etheridge, Joan Jett and many others have created grant awards through the Girls Rising organization.