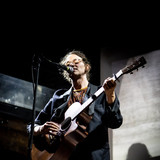 Philipp Walter is the solo project of the now 30-year-old musician and chansonnier Philipp Veit from Basel, who has already made his guitar sound in several bands and in a wide variety of projects such as En Rêve, Kream Hook, and many more.   Veit is lyrically very inspired by the great German-speaking songwriters. He mobilised a whole team of 28 artists and musicians from his circle of acquaintances during the lockdown phase to create the piece of art "Zwischen Zwei Stühlen". The album was realised with the production by Benjamin Marti (Ben Lucas), the filigran mastering by Jari Antti (former Navel, Mr. Ray) as well as the artwork creation by Clemens Marti (Clee). A dramaturgical rollercoaster ride with musical background describes the whole project in two words.   The first singles "Kaffee & Zigaretten" and "Hoffnungloser Optimist are out now. The album "Zwischen Zwei Stühlen" is going to be released on the 22th of October 2021.