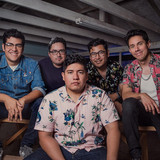 Dandy Heat is a rock band from McAllen, Texas, formed in 2010. What began as a duo eventually grew into a five-piece endeavor, which includes members of various regional groups. The band currently consists of Joseph Macias, Osmar Alanis-Monsivais, and Eric Vazquez on guitar and vocals, Fabian Vazquez on bass, and Jose Galvan on drums. Musically, Dandy Heat borrows from genres such as rock, pop, indie, shoegaze, and punk. As of 2020, the band has produced two full-length releases and four singles.