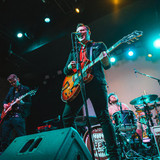 Rock n' Roll band from Asbury Park, NJ with their debut digital single Read on You out now from the forthcoming LP Nightbird Motel. Connor Bracken and the Mother Leeds Band have put people on notice that they are a rock and roll band to be reckoned with. In 2016 they released the full length album entitled The Light in the Day (Remastered in 2019) which has increased their audience rapidly. Connor and the band have received national exposure on SiriusXM Radio through airplay of the song Like a Dog and a live studio session that has sent the band into new territory. The same year the band was also featured in "Classic Rock Magazine" and on the magazine's compilation disc. The band's bread and butter is their live show. CB&MLB are taking every opportunity to bring their sound to people right in front of them. Having toured from Boston to Nashville, the band has a multitude of influences but their style and sound is all their own. They don't try to be anything but themselves and when they take the stage you can tell that they love being there, and you'll hear it in the music. Check out Wonderful Year (Live at the Wonder Bar, Asbury Park 2018) to hear the energy the band brings to each and every live show!