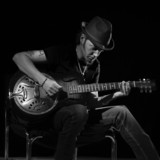 Peter Struijk was born on March 28th in Gouda, the Netherlands. Peter works as musician, teacher and producer. For his debut solo album

“Human Ways” from 2009 he recorded with his longtime friend the legendary Chicago blues singer Tail Dragger, with whom he also shared many times the stage at blues clubs in the “windy city” Chicago USA! In 2010 he launched his own blues & roots record & production label "Blueshine Records". From 2010 peter has worked with Robbert Fossen. Together they formed the Fossen & Struijk band. Their album “Clubbing” was released worldwide in 2013 and brought them to a lot of great venues. The band won the award for “Best Dutch Blues Band”, in 2014 Robbert and Peter as duo were the winners of the Dutch Blues Challenge 2012, and finalists at the International Blues Challenge in Memphis USA. In 2018 Peter decided to quit the band. Peter was also nominated for “Best Dutch Blues Guitarist” in 2013, 2014 and 2015!.On his latest acoustic solo release “STRAIGHT BLUES” he got some very special friends including Liz Mandeville, Rockin' Johnny and Riverside jr.!! Now in 2021 a new acoustic solo album is on it's way so stay tuned!