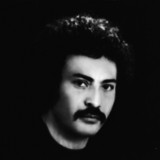 Esfandiar Monfaredzadeh, Iranian pioneer film composer, songwriter and filmmaker. Mostly recognized for his contribution to film and pop music in Iran. The quality of his work in films such as Gheisar (Masoud Kimiai, 1969), Toghi (Ali Hatami, 1970), Dash Akol (Masoud Kimiai, 1971) and The Deers (Masoud Kimiai, 1974) along with the huge success of these films at the box office and among the critics, put more attention on the music for films in Iran which until that day was not taken seriously by Iranian film industry. In parallel to his cinematic activities and through his well-known songs, he tried to represent Iranian people by picturing their pains and sorrows under the totalitarian Shah’s regime. In 1973, he was sentenced to jail for his social and political ideas. However after his release he would not remain silent and with his works (songs such as "Gonjishkak Ashi Mashi", "Childish (Kodakaneh)", "Nightly 2" or "Friday For Friday") he accompanied and supported people in the upcoming revolution. Shortly after the revolution, he decided to leave Iran and go to a self-imposed exile which continues to this day. During the exile, his artistic activities were extremely limited however he still believes in change for his country and his people.