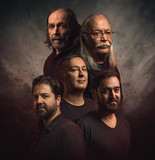 Moğollar, still on their journey since 1968, are one of the most significant names of -who are also the eponym of the term- Anatolian Pop.   The band who have spent the most of their career abroad, have won the Charles Cros Academy Prize in 1971 with the album they have released in France. (The winners of this prize were Jimi Hendrix in 1970 and Pink Floyd in 1972). The band have worked with the significant vocalists of the period sucah as Cem Karaca, Barış Manço and Selda but have been disbanded in the late 70’s as the recent conditions of the country were inconvenient to make music.   With a petition held in 1993, the band have come together again and Serhat Ersöz has joined them as keyboardist. In 2008, Emrah Karaca, son of Cem Karaca, as vocalist, has joined the band. As the legendary drummer Engin Yörükoğlu has been defeated by cancer in 2010, Kemal Küçükbakkal has joined the band and they have come up to the recent setup.   The 51 years old sycamore of Turkish music have released 23 extended plays and 11 studio albums. The secret of this productivity and existence is basically their sincerity…