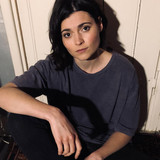 ​​Hattie Briggs is a singer/songwriter and multi-instrumentalist based in London. An independent artist and regular busker at Network Rail stations, she was fortunate enough to be discovered by platinum-selling singer, Alfie Boe, who was stopped in his tracks by her pure vocal while she was busking at Paddington Station in October 2018. She was personally invited by him to open all 21 shows on his recent UK tour, the finale of which was at the Royal Albert Hall on April 17th 2019, after which she and her band received a standing ovation. "I can honestly say it was the first time I had seen an audience stand and applaud a support act.” - https://tinyurl.com/y2392a4j. “I found Hattie busking in Paddington station, a beautiful little moment, it was wonderful, a peaceful moment within the chaos of London, a poignant moment that stuck in my mind and so I invited her on tour… I want her to go with her music and fly” Alfie Boe, Harrogate International Centre 2019 Influenced by Joni Mitchell, Foy Vance, Goldfrapp and Jeff Buckley, Hattie writes and sings straight from the heart, bringing together pop, folk and electronic influences, which she delivers with honesty and intent. Tom Robinson, BBC 6 Music - "knows exactly what she's doing", and "it's gorgeous" (commenting on single "Up to You") Kev Jones - Communion Records, Bears Den - “Brilliant songwriter….

your voice is off the scale”