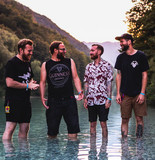 For fans of The Getup Kids, Motion City Soundtrack, The Swellers and The Menzingers. I Said Goodbye are a melodic punk band from Norwich in the UK. They've been playing together since 2016 and in a relatively short time as a band have released a debut record "Fairweather" and played widely across the UK and Europe including a very special set at Punk Rock Holiday 2018.  Based in Norwich, UK that band started out as an acoustic project by lead singer Alan with friends and former band members filling out the sound live. Charlie came on board as a guitarist having worked as a photographer for Alan's previous bands. Before long Pete Wright of Ducking Punches fame came on board as drummer and old friend Rob took up bass playing duties. The band play upbeat, energetic punk music and are known for soaring harmonies, driving guitars and pounding drums.

The band have shared stages with bands such as Flogging Molly, The Futureheads, Fatherson, Dave Smalley, Jonah Matranga, Steve Sotto, Kevin Seconds, Ducking Punches and We Bless This Mess to name but a few.   Their first record 'Fairweather' is currently available on Limited Edition Cyan Blue splatter vinyl and is available from, https://isaidgoodbyelrr.bandcamp.com/