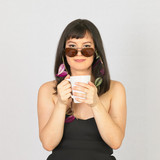 The songs on Something Simple have already earned Pamela some accolades: American Songwriter awarded her an Honorable Mention in their July 2018 lyric contest for her original song "Cardboard Cutout”, and her song “Bleeding Me Dry” received the Grand Prize in the 2019 SongDoor International Songwriting Competition. Tony Zotta, President of SongDoor, says, “Pamela's song was a runaway winner...It's the largest margin for a winning song we've ever had, a real testament to the songwriting ability of Ms. Machala.” In addition, Denver’s Westword nominated Pamela for “Best Pop Act of 2019.” Pamela’s songs would fit comfortably on a playlist featuring artists such as Sara Bareilles, Carole King, and Lake Street Dive.