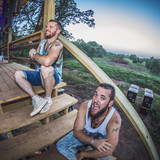 Just outside the jazz mecca of Kansas City springs liberal oasis Lawrence, Kansas—separated only by the waves of wheat from the epicenter of the electronic music revolution in Colorado. From Lawrence, it would logically follow that an act could rise to prominence fueled by the swing of Basie, the birth of Charlie Parker’s bebop, and the wild frontier of electronica. Born in funk and bred in the digital age, live electronic duo The Floozies have burst onto the scene at a time when the industry needed them the most. Brothers Matt and Mark Hill share the stage just as easily as they share a musical brain. Without a setlist, and without a word between them, Matt’s guitar is in lockstep with the thud of Mark’s kick. Endless looping and production builds the raw scenery upon which palm muted chugs, searing solos, and wobbling bass paint their dazzling array of colors.