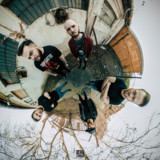 Five More Minutes consists of five members and is one emerging band in the Hungarian underground scene. Their style went from the earlier melodic, snappy rock-metal to a heavy riff-based, dark country and metal-fueled stoner music. The lyrics are inspired by the deep emotions, general anger and fury caused by disturbances in human life. In a broad sense, they play rock music, but with proper definition, it is „craft stoner metal from Szeged”. The band debuted with their first EP of three songs named „Go Away” in 2016. Then they played live permanently, and one year after the debut record the first music video to the single “I Wanna Know” came out, which was recorded at Miracle Sound Studio and shot by Elephant Studio. The group came out with an EP of five songs titled “The End of the World” early 2018, and started their band merch consisting of T-shirts, fridge magnets, bottle-openers and key-holders. The band spends the year 2019 to creation; the new songs are set to hit audiences in 2020.