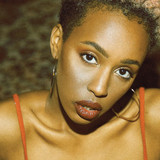 Louam is an artist and a songwriter from Oslo, Norway. While growing up as a young vocalist, Lwam ‘Louam’ Feshatzion always favoured “gold-school” R&B music and strong female acts from the 90s and 00s. Her forté is fun, energetic and up-beat music, as it is her personal approach to the modern R&B-pop. Louam released her debut single in February 2017 and has since released a number of singles who attracted radio listings in Scandinavia. In addition to her solo singles she also released duet singles with Swedish artist Jagne and Norwegian artist JNS and Andreyun. Since her solo debut, Louam has spent hours in the studio or been on stage performing. Along the way she has found an even more refined sound through her hard work and new experiences. Louam's debut album "Wreckless Love" was released Thursday 14th February 2019.