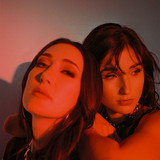 As the new duo Jackson+Sellers, Jade Jackson and Aubrie Sellers are getting a second first impression with their stunning and surprising new album, Breaking Point. Drawn together by seemingly cosmic forces, they first crossed paths through back-to-back gigs at Americanafest in Nashville in 2019, a fleeting moment that eventually led to a deep friendship and a true recognition of kindred spirits. Breaking Point, their exceptional debut on ANTI- Records, establishes Jackson+Sellers as women who share an intuitive musical kinship and a rare ability to craft tight singular pop-rock tracks without losing sight of their songwriting selves. Co-produced by Sellers and Ethan Ballinger, the project is also a master class in unexpected vocal harmonic convergence. Sellers, who grew up in Nashville, cites influences as disparate as Led Zeppelin to Ralph Stanley in her musical upbringing. Meanwhile, Jackson absorbed the classic country that played in her parents’ restaurant in Central California, although her earlier records were produced by punk legend Mike Ness of Social Distortion. By the time Jackson and Sellers first intersected in Nashville, they had already built a strong following in their respective solo careers, releasing two albums each that sit at the corner of tough and tender, vulnerable and ferocious, reflective and rowdy. Breaking Point is simply the next step in their musical evolution.