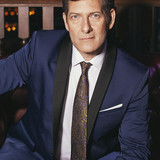 Born in Vienna and raised in Canada, Micah cut his teeth in the jazz clubs of Toronto while still a teenager. In 1989 he joined A Capella Vocal group The Nylons renowned for their world wide hit "The Lion Sleeps Tonight". As a member of the The Nylons Micah was brought into the global music scene with a busy concert, TV and Media schedule. Touring throughout Europe, Asia and North America fans around the world were introduced to Micah’s rich soulful baritone voice. Post Nylons has seen Micah launch a busy solo career touring the U.S.A. with his #1 international club hit "Welcome To My Head" and a return to a jazz-oriented style of his earlier years resulting in a series of critically acclaimed recordings including his most recent chart topping “New York Stories” (eOne Music). Micah's new album “Vegas Breeze”