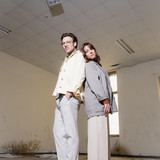 As twins, Mario and Giovanna Fartacek have spent their whole lives together, sharing an extremely intense bond. Fuelled by a mutual passion for music, they founded Mynth – an exceptional electronic music project, with vocals that are delicate but also powerful and emotionally charged. Having won the Amadeus Austrian Music Award in 2017, Mynth is one of Austria’s most well-renowned bands. On November 6 2020 the twins released their third studio album ‘SHADES I MYNTH’ -

a magnificent pop record, with echoes of David Bowie, Kate Bush and Fleetwood Mac. There are hidden messages of a mint-green palette behind every track on this record. Put together they tell the story of the band’s shading – sometimes finely nuanced, sometimes loud. Within an extraordinarily harmonious colour and tone range Mynth refined their electronic triphop roots and blended them with an impressively organic sound. While every song on ‘SHADES I MYNTH’ paints a different picture, Giovanna and Mario have succeeded in creating a concept album that is coherent throughout.