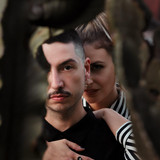 Drunky Daniels are two DJs and music producers of the dance music business, with 15 years of experience on spreading good music, all over the world. Ella Whatt and Vini Ferreira collect no less than 150 releases, by renowned labels such as Spinnin' Records, Sony Music, Seres Produções, Toolroom and Warung Records. Drunky Daniels first album, "Zabumba", was released in July 2019 and achieved an unprecedented feat: it was voted Album of the Week by Traxsource, selected from hundreds of releases worldwide. The album mixes the organicity of Brazilian instruments, harmonized with creamy house and techno beats. "Zabumba", named after a Brazilian music instrument, doesn't lack of personality, presenting itself as an album where each track is present by a reason - something quite rare in the electronic music universe. No wonder, this fresh authorial work has conquered dance floors and cases of artists as diverse as Black Coffee (South Africa), Hot Since 82 (UK) and Hyenah (Sweden).