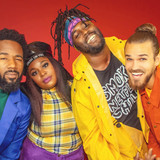 Tank and The Bangas

Featuring Tank and The Bangas

Since the release of their major-label debut Green Balloon (Verve Forecast, 2019), Grammy-nominated Tank and the Bangas’ star continues to rise. In the past year alone, they gave standout performances at Afropunk and Newport Jazz Festival; national television performances on The Tonight Show with Jimmy Fallon, The Today Show, and Austin City Limits; plus looks in Vogue’s September Issue, Essence and more. 2019 came to an exciting close with the announcement of their Grammy nomination for Best New Artist. The band continues to record and new music will be released in 2020.