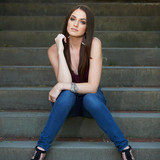 Singing soulful music has always been 27 year old Caitlin Caporale's calling. Her debut EP Canvas is infused with a Soulful/Pop sound and lyrical content that shines through to listeners. Caitlin has impressed millions with her authentically emotional yet uplifting voice. She is a power house with smooth dynamic vocals that exude a heartfelt message. Her first single, "Guarded Heart," proves she has the chops to hold her own in the music industry. Caitlin made her National Debut on the Emmy Award Winning hit television show, NBC's "The Voice." She showed the world that she could sing effortlessly and toe to toe with one of the top vocalists of all time, Christina Aguilera. The two performed an epic unrehearsed duet of Aguilera's "Impossible." All four coaches were amazed by the incredible sound! From the start, Caitlin had a competitive edge and soon America would meet this petite vocal powerhouse. It was on Season 8 on Team Pharrell, that she revealed she was a competitor. Mentored by the legendary Lionel Richie and Nate Ruess from the American indie band, “FUN.” Today, her blind audition has reached over 10 million+ views nationwide. After a successful run on The Voice, Caitlin performed for thousands at one of the largest summer events in New York The K104.7 Summer Concert-KFest at Dutchess Stadium in Wappingers Falls, NY (June 2015). She fiercely opened the show alongside mega stars Robin Thicke, Flo Rida, Charlie XCX, Walk The Moon, Katy Tiz, Dillion Francis and more!