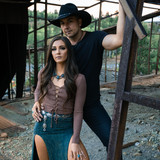 Austin’s Rose’s Taylor Cornilles and Tim Gore both shared a dream of becoming country music stars, but never imagined doing it as a duo. Coming from opposite ends of the country, they met each other playing the bars on the world famous ‘lower Broadway’ section of Nashville. They began writing and playing together and soon discovered the extraordinary blend of their voices when they sang together. In 2018, they met award-winning producer, Paul Worley, and together they’ve recorded 5 songs together. ‘Rain on the Roof of This Car’ is the first song to be released from those sessions. They plan on releasing more songs throughout 2019 and 2020.