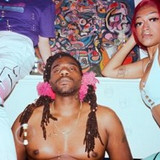 Rapper/producer Deuce Ellis is an anomaly, plain and simple. While he was born in Buffalo and raised in Brooklyn, he sounds nothing like what you might expect from either area. Instead of hardcore bars about street life and throwback beats, he’s delivering insightful poetry and his own distinct brand of production. He is more about good vibes and opening his third eye, than he is about criminal activity and misogynistic anecdotes. When other emcees are making their way to Atlanta or LA to try to increase the chances of being discovered, Ellis relocated to Honolulu, Hawaii for a few years to broaden his horizons. Although he credits modern masters like J Dilla, RZA, and Pharrell Williams with being his major production influences, he is quick to assert that soul god Marvin Gaye and groove genius Quincy Jones inspired him before he ever touched a piece of equipment. Interestingly enough, he was gifted RZA’s old Korg Triton by Popa Wu, which has been the main motivation to record his upcoming album, Dawless, using strictly classic equipment and live instruments. If the shallow sentiments of Trap and the bleak diatribes of Reality Rap are not exciting you anymore, look no further than left field offerings of Deuce Ellis.