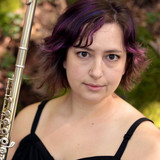 Pittsburgh based musician Katie Shesko is merging her love of flute and video games to bring the instrument to less classical music. She not only arranges, records, and produces her music in her home studio, but she also streams on Twitch improvising over the audience’s favorite songs. Katie studied Industrial Engineering at the University of Pittsburgh.

While in college, she was involved in the marching, concert, and pep bands. Even though she was an engineer, flute was always her passion. Katie began streaming on Twitch under the name BackseatLink in November 2016 and became affiliated in April 2017.