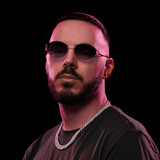 Lucenzo is a Franco-Portuguese award-winning singer and songwriter who broke through in 2010, with his title track Vem Dançar Kuduro, who was positioned on the top charts in Europe and broke all paradigms and with a master stroke imposed his own music genre. Driven by this incredible success, Lucenzo followed his dreams, crossing the Atlantic to conquer Latin America. To achieve the latter, he decided to appeal to the Puerto Rican star of Reggaeton, Don Omar. This collaboration gave birth to the Latin version of Vem Dancar Kuduro, titled Danza Kuduro. The success was immediate, setting new world records and transforming Lucenzo into a global music star. On its release, it became the best-selling Latin song in the world and the Music video became the most viewed Latin music video of all time on YouTube. This earned him 7 Billboard Awards over 3 consecutive years, a Grammy nomination and a BMI Award. In 2011, the title was further chosen as the soundtrack of the Hollywood Blockbuster Fast & Furious 5. With more than 6 million sales and over 1 billion views on YouTube to date, this song is in the record books of history as undeniably a Latin classic. That same year he released his album Emigrante Del Mundo and the single Baila Morena followed up in 2012 with the hit single Wine it up, a collaboration with the Dancehall superstar, Sean Paul. Thus positioning both singles to once again top the charts in Europe.