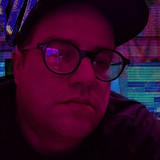 One-person experimental techno artist Molar M (aka Derrick Gales) has done it all, from driving 18 wheelers to selling music in Times Square, but mostly loves music, driving, and video games. Born near Chicago, Molar M got into music when their grandparents bought a battery-power keyboard to play in the car, and also an Atari 1200XL computer to program in BASIC, where you could create weird computer graphics and electronic noises. From there, in the early 90's Molar M moved to Alabama, and as a teenager discovered a lot of their early influences: Björk , Aphex Twin, Nine Inch Nails, Chris & Cosey, and more experimental artists like Matmos and Autechre. Molar M had access to a computer lab in a local college with music software and made some

music under the name "X-plane" When the 00's rolled around, and Molar M found music creation a bit more accessible, they made more music, this time under the name "The Traveller", releasing an album called "Angels in the Outland" on their birthday - to an empty warehouse. More musical experiments followed, with a name change to Molar M and tracks on Soundcloud, and "official" music videos on YouTube. The most recent release was the album "xSx", an album more about memories of the 80's and dark arcades than dancing, it was made in 2016 and released in 2019. What's next for Molar M? Touring? A collaboration with Iggy Oddity for a song called "You Have No One To Blame But Yourself"? A new album of industrial-heavy tracks? Stay tuned!