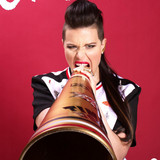 Powerhouse Celeste Stoney is a platinum selling singer songwriter, American Idol Semi-Finalist, MTV's Making The Band 3 Finalist, USA Songwriting Competition #1st Place Winner and has written for several artist including Alexandra Burke, Bobby Brown, Foxy Brown, Fugative, Ja Rule, Jessica Sanchez & Raekwon. Being influenced by artists of the 80′s, her sound is a mix of pop, soul and retro-funk, all of which are crowned by the effortless power and control of her richly distinctive voice. Celebrity blogger, Perez Hilton says, “Celeste Stoney reminds us of Pink” and CNN says, “Thank you! There is a female who brings ‘true music’ back.” Celeste debut single, “My Kinda Crazy” gained industry buzz performing to sold out shows in LA and culminating in an invitation to perform at the LA GRAMMY Showcase to open up for Grammy Award-winning artist, The Weeknd. Celeste shifted gears from being on the stage to pitching her music for TV/FILM landing the song, “Sisters” on the Freeform Media hit show The Bold Type, the song “Living A Lie” on UMC series, Monogamy and the end credit song, “Shadows Come Alive” for the Amazon Prime documentary, Obscene Beauty. Her newest single, “DUMB” which will be released to all outlets on 8.11.20 is a no-holds-barred reality check of society including addressing current issues like police brutality and the divisions in our country and is released with a satire laced music video shedding light on real issues.