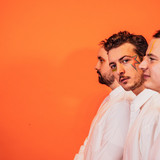 Melodic post-hardcore band Carnival Kids formed in 2010 by musicians from Oslo, Norway and Liverpool, England: guitarist/vocalist Jethro Fox, vocalist Eric Molumby, bassist/vocalist John Stark, and drummer/vocalist Andreas Westhagen. The group's sound was heavily inspired by hard, angular alternative and hardcore bands such as Rival Schools, Converge, and Botch. They debuted with anthemic 2013 singles "Fear of Nothing" and "What to Do When Awake Within a Dream," both on Killing Moon Records. The group played shows with Gallows and Trash Talk, and signed with Warner Music in 2014. They traveled to Colorado to record with veteran punk producer Bill Stevenson, and debut full-length While the World Keeps Ending was released in 2015. ~ Paul Simpson, Rovi