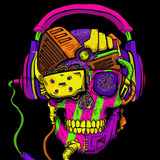 It all began with an interest in thunderously percussive Metal (Rage Against the Machine and Slipknot) to an evolution into lyrical and catchy Hip-Hop (Gang Starr, Beastie Boys, Wu-Tang, &amp; Hieroglyphics) until finally arriving to the pulsating rhythm of Electronic music (Paul Oakenfold, Armin Van Buuren, and Odesza). This varied background, coupled with the exposure to a multitude of live and recorded musical genres shaped Rortron into the DJ/Producer he is today. This results with sets that illicit the deep, layered textures that combine a mixture of the old and new, familiar with exotic, catchy with contagious...and a genuine passion to share a truly memorable experience. As a strong supporter of Eugene’s independent musicians and artists, he is familiar with the efforts involved in a close-knit music scene. Originally a songwriter and emcee, he has impromptu performed on various stages throughout Eugene and his original collaborations with friends were what brought him to to the city in the first place. A line from one of his verses reads, “...can I have just a moment of your limited time? Man it feels so good when it all just aligns… when we all just unwind…”