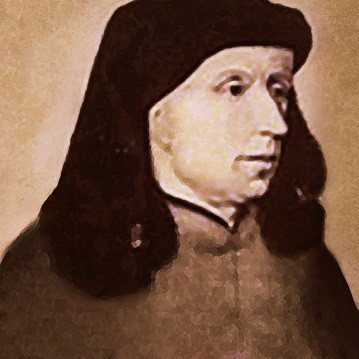 The birth of one of the most renowned singers and composers of the entire fifteenth century remains unfortunately shrouded in mystery. Though later poetic and archival sources confirm Johannes Ockeghem's birthplace, in the French-speaking province of Hainaut (modern-day Belgium, but at that time a part of the Duchy of Burgundy), only broad guesses may be advanced for his birthdate. A well-known poem laments his death "before reaching one hundred years," and a manuscript illustration of the French Royal chapel pictures one prominent aged figure with wrinkled skin and thick glasses. However, a visiting Italian as late as 1477 described Ockeghem as yet beautiful and utterly dignified in manner. Whatever his age, by the 1440s and 1450s, Jean de Okeghem (as many contemporary French documents call him) was well on the way to a musical career of international renown. He can reliably be documented in service as a singer at the Church of Our Lady in Antwerp at least from June 1443 till June 1444 and in the private chapel of the French Duke of Bourbon at Moulins from 1446 to 1448. In 1450, he began serving the Kings of France directly, and would remain to his death the jewel in the crown of the French Royal Chapel. Ockeghem served three successive Kings over nearly 50 years: Charles VII (until the monarch's death in 1461, for which the Requiem may have been composed), Louis XI (1461-1483), and Charles VIII. As early as 1454, court registers record Ockeghem giving a songbook to the King personally; these refer to him as premier chapellain. Along with this prestigious title, Charles VII named Ockeghem to the powerful and lucrative post of Treasurer of the Abbey of St. Martin in Tours, the wealthy monastery of which the King was himself titular Abbot. Then, in 1464, Louis XI elevated him to be called Maistre de la chapelle de chant du roy; the distinguished singer and composer would hold all three titles until his death. In addition, he held benefice incomes such as a canonicate at Notre Dame in Paris (later exchanged for one at St. Benoit, Paris). He appears not to have traveled much, though in 1464 he visited Guillaume Dufay in Cambrai, and in 1470 journeyed to Spain. His will in 1484 endowed the chapter of St. Martin with his goods and income; this may have been in response to an illness. His death, however, (apparently in retirement) did not occur until 1497. Ockeghem enjoyed a stellar reputation among contemporary musicians as well as his employers. He apparently knew Gilles Binchois, composer to the Burgundian Court, for whom he composed the lament Mort, tu as navré in 1460. In turn, Antoine Busnois, singer of the count of Charolais (soon to be Duke of Burgundy) honored Ockeghem with the motet In hydraulis in 1465-1467. Johannes Tinctoris, theorist and composer, called Ockeghem the first among all the most excellent composers of his time, and even Duke Galeazzo Maria Sforza of far-off Milan sought his assistance in the recruitment of singers. Upon Ockeghem's death, laments were composed by some of the greatest figures of his age, including poets (Guillaume Crétin and Jean Molinet), composer (Josquin Desprez), and thinker (Erasmus of Rotterdam).