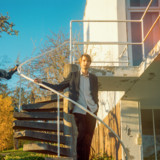 Christian Winther is one of Norways clearest examples of an anti-guitarist, as he sort of rejects the many clammy expectations that come with the instrument. This is something often found both in the alternative rock-scene and improv-scene, but with Winther the contrary is connected with a genuine desire to find the beautiful moment, the shimmering harmony. Although noise and experimentation is part of the picture, the influence of Brazilian music or the way the guitar somehow found a new melodic balance in the 90s Chicago scene, seems just as strong. Contrasts find a harmony here, especially when tied with Winther’s long-term musical friends Magnus Skavhaug Nergaard (bass), Anja Lauvdal (keys), Hans Hulbækmo (drums) – all notable performers on the Scandinavian exploratory music scene in bands like Broen, Årabrot, Atomic and Jenny Hval – and their direct and intuitive style of playing, not to mention Winther’s voice. Beautifully direct, his voice sounds equally sincere and unpolished.