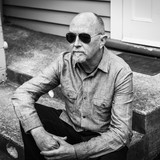 Dave Dobbyn says that since day one, he has had a tune in his head. He’d be twiddling the dial on the radiogram, “travelling the world in music”.

In 40 years as a recording artist, he has written the soundtrack to kiwi lives, with a string of hits including ‘Beside You’, ‘Be Mine Tonight’ ‘Language’, ‘Outlook for Thursday’, ‘Loyal’, ‘Whaling’, ‘Kingdom Come’, ‘It Dawned On Me’, ‘Guilty’, ‘Devil You Know’, ‘Slice of Heaven’, ‘Magic What She Do’, ‘Oughta Be in Love’, ‘Welcome Home’.… And the hit’s haven’t stopped coming, when in 2016 Dave released his ninth studio album ‘Harmony House’ to critical acclaim, toured extensively here and overseas, and released a compilation of his best loved track early 2017 to mark his 40th year in the biz. In the world of pop music, longevity is rarely achieved but Dobbyn’s talents have consistently charmed their way into the consciousness of New Zealanders.