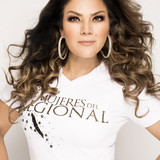 Duranguense is generally a man's world, with very few female voices to mention in the rapidly growing genre. Diana Reyes appears perfectly comfortable staking her claim nonetheless. Born in Puerto de la Paz in Baja California, Reyes showed an affinity for music early on. Under the name Diana Polanco, she began performing in local festivals and giving concerts while most of her peers were in the first grade. She recorded her first norteño record at the age of eight in Guadalajara, generating the singles "Barrios y Escuela" and "Cristo Rey." Reyes continued to perform throughout the early '90s, gaining attention and the notice of important figures in the regional Mexican music world, including Lola Beltrán, who took a special interest in her. A few years later Reyes recorded her first full-length record, entitled A Todo Norte, which opened doors all throughout her family's home state of Sinaloa. She soon relocated to Mexico City to sign with Azteca Music, with whom she won national fame. "La Joya Nortena" and "Querida Socia" became some of the most played radio hits of 2000, winning Reyes the popular alias "La Socia," also the name of the 2001 release on which the hits appeared. As the winds of Duranguense blew through the nation, Reyes felt a strong pull to redefine herself artistically, and she recorded an album entitled La Reina del Pasito Duranguense, featuring the hits "Rosas," "El Sol No Regresa," and "Como una Mariposa." That album became her first gold record, to be followed a year later by her second, Las No. 1 de la Reina. Reyes' third gold record was released in 2007, entitled Te Voy a Mostrar. ~ Evan C. Gutierrez, Rovi