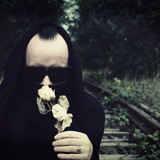 Tyves Oben [place4tears] is known for his work in goth scene. For lots of compilations, his magazine called crawling tunes, his cold-heavenly-goth band Place4Tears and his current project Scarless Arms He worked together with Monica Richards of the well known Faith And The Muse or Sean Bowley of the ethereal dark wave band from Australia called Eden https://open.spotify.com/artist/5hf8ArAjNpwGYWE2o7ixTK?si=cPbIxuczRFuT1zBsq21SEw for the track Tears of Avalon. Also he did some collaboration work (The Other Side & Blown Away) with The Spiritual Bat ... Tyves Oben [place4tears] released a single dedicated to tabletop/role players. It's almost 15 minutes long and it's called Otherworldly Walk . Currently he's working on a collaboration single with US based ambient artist @Andrew Black . the single will be called "Dissolve" and will be released on 28th of February 2020. have a look for @scarless arms