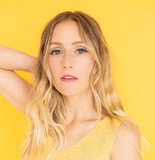 “Heavenly harmonies” – The Seattle Times “Impressive dreamy soundscapes…and [majestic] songwriting” – KEXP 90.3 FM “Sonically and melodically brilliant” – Seattle Music Insider Lemolo is the creative brainchild of Seattle based singer-songwriter and multi-instrumentalist Meagan Grandall. Since forming in 2009 and serving as her own record label, Grandall has independently released three full-length Lemolo records, The Kaleidoscope, Red Right Return, and Swansea, and is a featured vocalist on the new Pearl Jam album, Gigaton. Lemolo has been a staple of the Seattle music scene, with all three records being included in KEXP’s “Top Listener Voted Albums” of the year lists. Lemolo was also voted “Best Seattle Band” by City Arts Magazine and named one of Google Play’s “Best Unsigned Artists of the Year.” With support from a talented host of musicians, Grandall has had the pleasure of touring nationwide and performing with acts such as The Head and the Heart and Sharon Van Etten. Lemolo's new cover of "Mad World" is out now! Support independent music and follow Lemolo at www.lemolomusic.com.