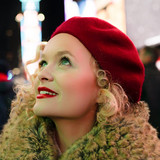 Amanda Jane Cooper floated by bubble in Wicked on Broadway, serving as the show’s 15th Anniversary Glinda and performing with legends Kristin Chenoweth and Idina Menzel on NBC. Amanda is one of the longest running actors to have ever played the role, having also performed across the United States in both the First and Second National Tours. You can see her as the face of the role in the show's new national commercials and billboards. In 2019 she appeared as a closing night guest in Kristin Chenoweth's FOR THE GIRLS on Broadway. Growing up in Valley Forge, PA, she graduated from Carnegie Mellon University with a BFA in Musical Theatre & Acting. You’ve seen Amanda in guest and recurring roles on shows like “Glee", “Jessie" on Disney, “Selfie" on ABC, “Bones", “CSI", "Law & Order: SVU", the Hallmark Channel, Lifetime and more, as well as several films. Her Instagram comedy #TheBaeSeries keeps fans laughing and her solo cabaret “Somewhere Over the Rainbow”, which debuted at 54 Below in New York City, invites us into a story of hope and redemption in her life. She hopes that these Christmas singles will bring some joy and help you let your heart be light this holiday season. Her I Am Second testimony film launched in June 2019 and can be viewed here: IAmSecond.com/amanda Photos & cover art by Alexandra Nurthen at ALNImages.com /// Songs Arranged & Produced by Vincent John + La Dante. Recorded at @EraserhoodSound.