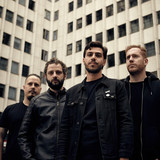 “Burn the Artisan” is the 4th album from the spaniards The Blackjaw. Full of energetic punk rock and rock tunes in which the lyrics will guide you through “bad luck stories” not only as a sad and dark point of view but as a celebration. The album is out now in digital platforms, White Russian Records (Netherlands), Bartolini Records (Spain) and Incendiaria (Spain) released the vinyl edition. The band has been touring for 10 years now, sharing the stage with bands like The Flatliners, The Menzingers, A Wilhelm Scream, Red City Radio, RVIVR or Frank Carter & The Rattlesnakes among many others. Tour is on, so don´t miss these guys if they come nearby!