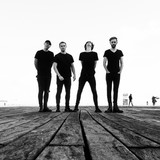 PET NEEDS play fractured party music. The band was born when guitarist George landed on his brother Johnny’s sofa in Colchester after abandoning a job in a Midlands petrol station for the dazzling lights of Essex. They didn’t have a plan. But they had guitars. With explosive live performances of singalong anti-anthems, PET NEEDS began smashing sets on stages throughout the UK, screaming stories of disastrous job interviews, self-destruction and heading down the river on an inflatable kayak. They continued throughout 2019 at a blistering pace. As with everyone, plans for a summer filled with festivals and shows were pulled during the lockdown and the band had to have a re-think. On the day they were meant to be playing Berlin Arena, Johnny and George went for yet another furlough walk around a reservoir. Which is where it was decided. 2020 would instead be the year for the band to finish writing and recording their debut album, Fractured Party Music. No time like the present, eh? After meeting at Camden Rocks 2019, friend Frank Turner came on board to mix and master the record, the one man able to harness this collision of frenetic energy stored up from months bereft of live shows. Splitting everyone’s lockdown hangovers with screeching feedback, tangled wiry riffs, and sharp, cynic-baiting lyrics that are spat, chanted and hollered, this is nine months of phantom gigs pumped into 33 minutes.