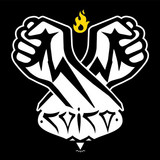 Cuico takes Hip Hop to another level. The band with its twelve members from all over the world unites beats from the heart of Hamburg and Spanish Rap, combined with Latin grooves, a solid Rock attitude, funky brass sounds and a flavour of Electro. The musicians have musical roots in very different genres - be it Jazz, Salsa, Samba, Folk, Metal, Classical Music or Pop - , so Cuico's songs are inspired by a variety of styles. Through these different musical and ethnical backgrounds, Cuico represents the notion of music as a multicultural melting pot. This idea is also reflected in the lyrics, which are concerned with both local and global issues of the musical industry, politics, racism, and the criticising of obstacles to peacefully living side by side. Cuico was founded in Hamburg, Germany in 2010. Keyboarder René and bassist Arne, who were playing together in a Jazz combo, met Chilean rapper Ricardo at a New Year's Eve party. Ricardo, former frontman of the Hip Hop band Legua York who were highly successful in Latin America, had just moved to Germany and was looking for a new musical project. The idea of combining Spanish lyrics, Hip Hop Beats and influences from other musical styles appealed to the three of them, which led to the decision to make an album, to be followed with a concert in Hamburg's famous Fabrik.