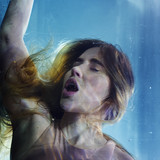 Norway's Highasakite emerged in 2012 with a sound that fused icy synths and dramatic indie pop with a more organic percussive rock element. After establishing themselves with their debut, the band achieved widespread success with their 2014 follow-up, Silent Treatment, which topped the Norwegian charts and remained in the Top 40 for two years. 2016's Camp Echo marked their second number one, setting the table for Highasakite's 2019 release, Uranium Heart. The band formed when vocalist Ingrid Håvik met drummer Trond Bersu while studying jazz at the Trondheim Jazz Conservatory. Starting as a duo, they soon recruited producer Thomas Dahl to help out on bass and guitar, while also adding Øystein Skar to play synthesizer. Once bonded, they spent six months working on their debut album. All That Floats Will Rain was released in early 2012 by Riot Factory Records in Norway, and the tightly wound, dramatic style of indie rock on display found favor with critics. After the album's release, the band began to play live shows, adding Marte Eberson on synthesizer and Kristoffer Lo on guitar, percussion, flugabone, and tuba to fill out the sound. The band played many prestigious festivals during 2012, including Øya in Norway and Iceland Airwaves. While working on a follow-up album, Highasakite turned to the U.S. market in early 2013 with the release of the In and Out of Weeks EP (which consisted of the first five songs from All That Floats Will Rain) on Propeller Records. Subsequently, they entered the studio with Norwegian producer Kåre Christoffer Vestrheim (Ida Jenshus, Katzenjammer) and recorded their second full-length, Silent Treatment, which arrived in 2014. The album was a major success in Norway, reaching number one on the pop charts and earning Highasakite a Spellemannprisen (the Norwegian equivalent of a Grammy Award) for Pop Group of the Year. In 2016, they returned with the more politically minded follow-up, Camp Echo, which featured the singles "Someone Who'll Get It" and "Golden Ticket." That same year, Highasakite performed at the Nobel Peace Prize Concert. The non-album single "5 Million Miles" appeared in 2017, followed a year later by "Out of Order," the lead single from the band's fourth album, Uranium Heart, which was released in January 2019. ~ Tim Sendra, Rovi