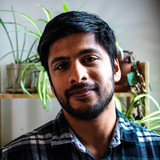 Since graduating from the Royal Academy of Music in 2014, Mike has gone on to perform around the country, as both a band leader and a side-man, performing at prestigious London Jazz Venues such as Ronnie Scotts, The Vortex, and Pizza Express Jazz Club, as well as performing internationally at Jazzwerkstadt in Graz, Austria in 2018.   He leads the Mike de Souza Trio which released their 3-track EP ‘Road Fork’ in December 2018, and Mike will soon be releasing his debut album 'Slow Burn' featuring Jay Davis (Drums), and Huw V Williams (Bass), which is due for release in October 2019.   Mike is also a co-founding member of Big Bad Wolf, who released their debut album ‘Pond Life’ to critical acclaim in 2017 (“One of the best albums I’ve heard this year” – Mike Flynn (Jazzwise) on Europe Jazz Media), with more new music in the pipeline for release in the near future.   Aside from his work in Mike de Souza Trio and Big Bad Wolf, Mike regularly performs as an in-demand side-man on the London Jazz scene with bands including 'Beware of the Bear', 'Charukesi (Feat. Martin Speake)' and 'TwoSpeak'.