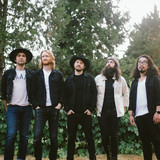 Conventional wisdom says the two frontmen of a band shouldn’t live on opposite sides of the United States, but that's never seemed to deter Avi Vinocur and Patrick Dyer Wolf.   Goodnight, Texas is a band whose strength lies in unexpected sweet spots. Drawing their name from Pat and Avi’s onetime geographic midpoint (the real town of Goodnight in the State of Texas, a tiny hamlet east of Amarillo), the four-piece also exists at the center of its songwriters’ contrasting styles — via a 1913 Gibson A mandolin and a 2015 Danelectro, at the crossroads of folk and blues and rock ‘n’ roll, in a place where dry wit and dark truths meet hope and utmost sincerity.   Built on a powerful foundation from drummer Scott Griffin Padden, bassist Chris Sugiura, and pedal steel multi-instrumentalist Adam Nash, the band's crafty albums blossom into a dynamic, rollicking live show on the road with artists such as Whiskey Shivers, Bhi Bhiman, Wild Child, Larkin Poe, Trampled by Turtles, Shakey Graves, and The Family Crest.   A Long Life of Living (2012) drew inspiration from Appalachia and the Civil War and Uncle John Farquhar (2014) was an exploration of turn-of-the-century family lore. 2018's Conductor, more electrically inclined than its predecessors, wanders through the American Southwest in the early decades of the 20th century. It's a record about turning points — personal, political, musical, global — and their possibilities.