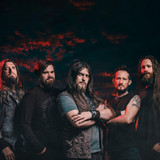 Groove/melodic death metal meets pirates? Why not! Vane takes the best of both worlds – heavy yet melodic riffs, growling vocals, fast drums, and bone-breaking bass together with a captivating story deeply rooted in the actual history of The Golden Age of Piracy. This mix brings music about pirates from pubs and brothels full of drunken mutineers to the metal ballrooms. Vane was formed at the end of 2016 and quickly started gathering an international fanbase. Before hitting the road, the band released an EP (The Prologue) and LP (Black Vengeance). Consisting of the three songs from the EP and seven more original tracks, the album tells a story about one of the strangest pirates of his times. The release of the album was supported by a tour and three music videos. Since then Vane has released 4 more singles (The Ritual, Row, Ye Scallywags! and Walk the Plank), supported by music and lyrics videos, and one EP (The Nightmare). The biggest achievements in the band’s short history are 5th place at Wacken Metal Battle, Pol’and’Rock Festival appearance, touring with some big names of Polish scene, finals of Bloodstock 2 The Masses and two live performances in Antyradio, the biggest alternative radio station in Poland.