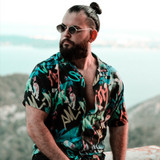 The Spanish DJ and Producer Lahox is proud to have worked for some of the most important labels in the industry such as Armada Music, Kontor Records, Cr2 Records, Juicy Music, Pacha Recordings among others. Today, Lahox has received support from many names in the dance scene, such as Armin Van Buuren, Tiesto, David Guetta, Nicky Romero, Don Diablo, Axwell, Laidback Luke Kryder, Quintino, Oliver Heldens, Thomas Gold and many others... His energetic and powerful sessions have led him to travel the world playing in Ibiza, New York, Miami, London, Barcelona, Madrid, Vienna, Manchester, etc. Nominated to best EDM artist of 2019 on the WMA, Lahox is undoubtedly one of the upcoming artists in the dance scene to keep in mind in 2021.