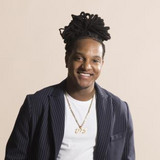 Jonna Fraser is an artist and songwriter from the Netherlands with Surinamese roots. Born in 1992 the rapper and singer is working on his craft since 11 years old. Armed with his soulful vocalsound, the heart of a lion and a wide smile Jonna hit the Dutch charts in 2015 for the first time. With the New Wave collective album he charted number one in the Dutch album Top 100. Since that momentum it started raining gold, platinum and multiple platinum plaques for the young artist. In the year 2016 Jonna releases his first megahit “Do or Die” with Broederliefde. Between 2016 and 2020 Jonna does 3 sold out national tours, over 700 shows, over 500 million streams and marks himself as a known and consistent hitmaker in the Netherlands by dropping 9 projects and having 7 out of 9 charting in the Dutch album top 100. In October this year the collab album "Championships" has dropped with Dutch superstar Frenna containing the hitsingle "Samen Met Mij". Currently Jonna is working on his 11th studio album.