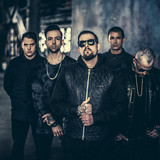 Formed in the late '90s, Maryland pop-punk outfit Good Charlotte made their mainstream breakthrough in 2002 with raucous hits "The Anthem" and "Lifestyles of the Rich and Famous" from their sophomore set The Young and the Hopeless. Influenced by Minor Threat, Rancid, and Green Day, the quintet made a splash on MTV with their youthful, rebellious videos, finding crossover success in both the pop and rock markets with subsequent international Top Ten hits The Chronicles of Life and Death (2004) and Good Morning Revival (2007). As members became fathers and the scene evolved, they embraced their roles as genre vets in the late 2010s, fueling the nostalgic pop-punk revival with 2016's Youth Authority and 2018's Generation Rx. The band was founded in 1996 by twin brothers Joel and Benji Madden. Inspired by a Beastie Boys performance on their 1995 Ill Communication tour, the Maddens enlisted the help of several high-school classmates in assembling a band that combined the energetic elements spawned from '70s punk with the sentimental ballads of mainstream corporate rock. Good Charlotte were soon formed, with Joel Madden handling lead vocals and Benji Madden playing lead guitar. Paul Thomas (bass) and Aaron Escolopio (drums) completed the early lineup, while Billy Martin later joined as a second guitarist. Although the band hailed from the suburban town of Waldorf, Maryland, Good Charlotte quickly made a name for themselves in nearby Washington, D.C., playing the WHFS annual rock show HFSFestival in 1998 and 1999. A year later, the band issued its spunky self-titled debut on Epic, and the single "Little Things" made minor waves. The Madden brothers scored a gig as MTV VJs and soon were all over the network's late-night rock show All Things Rock, which gave their band's profile a boost. The two spent time behind the scenes writing songs for their sophomore album, but Escolopio left the group to join his brother in Wakefield before recording could begin. Josh Freese was quickly enlisted as the band's temporary drummer (Chris Wilson would later replace him permanently). By the fall of 2002, Good Charlotte prepared to release The Young and the Hopeless, and the band's expanded audience was ready. Singles "Lifestyles of the Rich and Famous" and "Anthem" catapulted the group into the mainstream in 2003 and eventually drove the album into triple-platinum sales; shared dates with New Found Glory for the third annual Honda Civic Tour were equally successful. In 2004, Good Charlotte returned with The Chronicles of Life and Death, which hit number three on the Billboard charts but failed to sell as well as the band's previous album. Wilson exited the band in mid-2005 citing health reasons, and later went on to join the Summer Obsession. Dean Butterworth (who had previously drummed for Morrissey, among others) joined up in time for sessions for the crew's fourth album, which were held in Vancouver and away from the Madden-loving paparazzi (especially Joel and his then-girlfriend Hilary Duff). The much more varied Good Morning Revival appeared in late March 2007, spearheaded by the single "The River," which featured M. Shadows and Synyster Gates of Avenged Sevenfold. In 2009, the bandmembers announced that they were returning both to the studio and their punk roots. The group's fifth album, Cardiology, was released in 2010. Cardiology peaked at 31 on the charts and Good Charlotte went on hiatus. The Madden Brothers released a soft rock solo project called Greetings from California in 2014, and the pair reconvened Good Charlotte for 2016's Youth Authority. In December 2017, the band released a tribute cover of late rapper Lil Peep's "Awful Things." A full-length album, Generation Rx, appeared in September 2018. Produced by Benji Madden and Zakk Cervini, the LP fared better in Europe and Australia than the U.S., entering the Top 40 in the U.K. and spawning singles "Actual Pain" and "Prayers." Kicking off a new decade, the group joined Yung Pinch and Goody Grace on "Hanging with Ghosts" before returning with their own single "Last December" at the end of 2020. ~ MacKenzie Wilson, Rovi