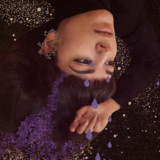 LA based, Swedish-Iranian Ayelle has been songwriting ever since she learned how to write.  Growing up in Sweden and Spain, she continued on to pursue music between London and New York, making her a trilingual songwriter signed to UMPG constantly innovating her sound and experimenting with blending genres. Known for her crossover brand of r&b/soul and Scandinavian pop layered with bittersweet, emotive vocals and poignant lyrics, she has garnered praise and support from the likes of Billboard, Pitchfork, Complex, BBC 1, Beats 1, Majestic Casual, and Highsnobiety. Ayelle received the prestigious PRS Momentum Fund in early 2019 whilst releasing a single every month for the entire year and performing at festivals like SXSW and Icelandic Airwaves. In 2020 she released a 12-track mixtape 'NOMAD', a homage to her nomadic Qashqai roots inspired by years of travel and self discovery whilst encouraging us all to self care more. During lockdown Ayelle could be found hosting live yoga sessions and guided meditations for the likes of Women In Music, She Said So and Noctis Magazine. “The warmth of the Mediterranean and the dreaminess of Scandinavia can both be heard vying for attention in her creations” - COMPLEX