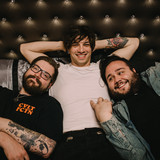 Hailing from Madison, WI ARCHERS emerged in 2015 after being founded by guitarist Ben Koehler, and vocalist Nathanael Pulley. Since releasing their debut EP Cuts & Bruises, the band has been anything but dormant. The past 5 years the band has toured regionally, and performed alongside well known bands such as I Prevail, Palisades, and From Ashes To New.   The band broke onto the national scene with their metalcore cover of “The Hills” by The Weeknd, which has racked up nearly two million streams to date. They kept the momentum going by following up with original tracks “Bleed For This” in 2018 and “Black Lung” in 2019.   ARCHERS’ newest body of work, “NEW NORMAL” is slated for release on all platforms on April 17th.

“NEW NORMAL” showcases a completely new sound by intertwining their traditional metalcore sound with pop elements. The new EP ignites a new era for the band and with even more on their plate for 2020, the band shows no signs of slowing down anytime soon.     Like us on Facebook: Facebook.com/archersofficial