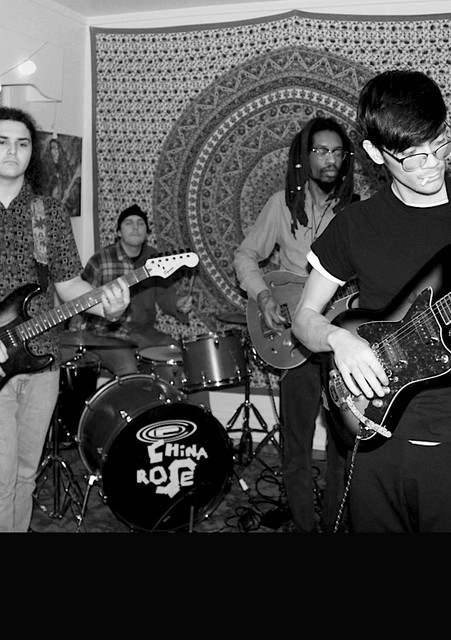 ChinaRose is an Experimental Psych Rock band from Chicago, IL. Combining psychedelic tones with a wide range of other influences such as blues, jazz, surf and progressive rock.   Stephen Rosenthal (Guitar/Vocals) Kheri Mason (Bass) Ryan Rambow (Drums) Alex Martell (Guitar)   ChinaRose formed in 2016 when Stephen Rosenthal (Guitar/Vocals) and Kheri Mason (Bass) decided to start a new project while their other bandmates in Spooktacular were away at college. Soon thereafter, they recruited Ryan Rambow, who had just thrown together a basement studio, to play drums and record their first album. After realizing the natural chemistry between them, they brought in Alex Martell (Rhythm Guitar) to fill out the band’s unique sound. They played anywhere they could around the Chicago DIY scene, just to get out there and hone their skills. This led into playing bars and smaller venues in Chicago, and eventually to a self-funded tour to California in 2018. Over the years, the psychedelic post-punks have stayed close to their DIY roots by recording, mixing and mastering everything themselves, and it continues with their newest release, Satori Mountain.