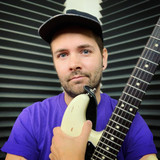 Guitarist & producer based in Los Angeles.   From his early childhood days in Copenhagen, Quist has gone on to perform all over the world. From the Hollywood Bowl to the Royal Albert Hall, he has performed both in his own name and as lead guitarist with British rock legend Bryan Ferry of Roxy Music, American singer Valerie June and several other artists - all while building his "jam fam" on YouTube, amassing more than 100 million views in the process. His debut EP on the College Music label In Nature with Mondo Loops arrived in late 2020 - and January 2021 saw his first release on Lofi Girl (Chilled Cow). The Fountain of Youth EP with coldbrew followed - and there's LOTS more music in store for 2021!   ENJOY